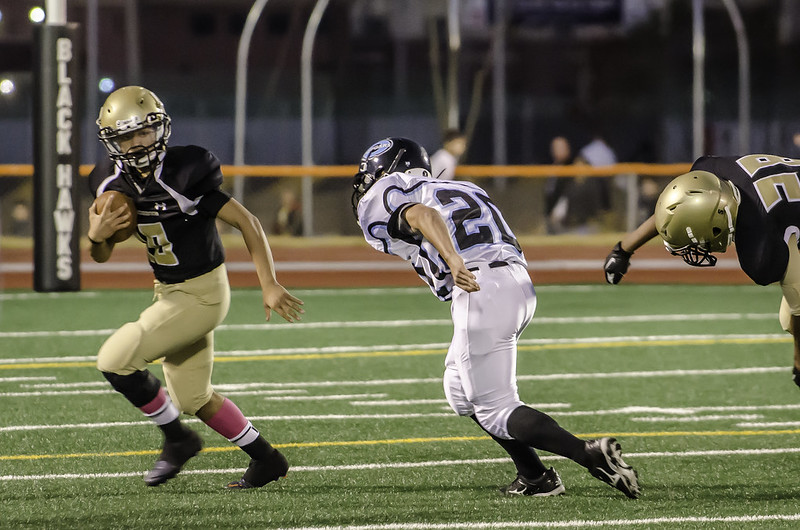 “But Jonah arose to flee to Tarshish from the presence of the LORD.”

We all probably have heard of the football player carrying the ball and running for his life but in the wrong direction. While playing JV football in high school I witnessed this happening as one of our defensive players intercepted a pass but when he started running, lost his bearings and started to run toward our opponent’s endzone. We had to stop him from running or he would have scored a touchdown for the other team. We all shook our heads and later after the game, we laughed about it, but at the time it wasn’t so funny and it looked like mayhem on the gridiron.

As we begin to read the Book of Jonah, it doesn’t take us long to notice that the main character the book was named after is given a very important task. As a prophet of God, Jonah was given one overriding responsibility, go to Nineveh and cry out against it. Later on in this small four chapter book we are told that Jonah’s message was short but not too sweet. Jonah 3:4 says, “And Jonah began to enter the city on the first day’s walk. Then he cried out and said, ‘Yet forty days and Nineveh shall be overthrown!’” Being a preacher I’m not into short messages (ok, stop smiling), but I really like this one. Sometimes you need to cut to the chase and make your point, and Jonah’s point was that if Nineveh didn’t repent of their sinful, evil lifestyle God was going to meet them with disaster.

As we see God command Jonah to go to Nineveh, we also see Jonah’s blatant disobedience and rebellion against Him. Jonah doesn’t just walk away from the Lord, he runs from Him. The word that the New King James and the English Standard Version use is “flee.” Perhaps the word suggests a sense of imposing danger for Jonah if he had been obedient to God. What we do know is that he is the only prophet commissioned to preach to pagan a nation and the only prophet on record to refuse to do what he was called to do. Although we cannot be sure, it is possible that Jonah knew that as a pagan country, Nineveh was an enemy of God. Perhaps Jonah thought God was wrong to warn a pagan country of their impending doom. What we do know is that Jonah ran, but didn’t get too far.

RUNNING FOR ALL THE WRONG REASONS

As my title indicates Jonah was running from God. There are all sorts of good reasons to flee at certain times. We should have a natural instinct to run when faced with personal danger. God has built into us the ability to fight or to take flight. Hopefully, we all know when to do both depending upon the circumstance.

But as we study the narrative, we realize that Jonah was running for all the wrong reasons. The first and most important mistake on Jonah’s part was his blatant disobedience to God. When God gives us a command it is not up for discussion, it is not left up to our own personal interpretation or rationalization, and it certainly is not to be ignored. An example of this can be seen in First Corinthians 6:18, “Flee from sexual immorality. Every other sin a person commits is outside the body, but the sexually immoral person sins against his own body.” I believe this passage is clear and it shouldn’t take a student of the Bible long to figure out what he or she should be fleeing and the consequences of sexual immorality.

So it is, the only acceptable solution to running from God is to turn about and run to Him. And as we will see, God is always there ready to give us another opportunity to do it right.

OUR GOD IS A GOD OF SECOND CHANCES

Even though Jonah ran from God, God was not through with him. I am convinced that we cannot exhaust the patience of God. If that were the case, I believe God would have done away with me a long time ago. So it is, we see Jonah being given a second chance, as God prepared a great fish to swallow Jonah when the sailors threw him overboard.

At some point, Jonah got the picture and realized that he needed to spend time in prayer with God. We are told in Chapter Two, “I cried out to the LORD because of my afflictions, and He answered me.” This is what God does. Our God is always a God of second chances, and dare I say more? Jonah realized that his situation was not only dangerous but after three days and three nights it was becoming deadly. So it is, Jonah prayed to the LORD, “I will pay what I have vowed.” As a prophet Jonah was going to do what was commanded and required of him—obedience!

GOD’S REQUIREMENTS HAD NOT CHANGED

Notice that God didn’t alter His requirement of Jonah. Yes, Jonah did say he would pay what he vowed, but God wasn’t going to give him a break as He says; in 3:1-2, “Now the word of the LORD came to Jonah the second time, saying, ‘Arise, go to Nineveh, the great city and preach to it the message that I tell you.’” What we learn from this passage is, that our God is extremely consistent in what He requires of His children. Yes, He is a God of love and compassion, He certainly exudes all the fragrance of mercy and grace, but His requirement that He places on His children stand.

OUR GOD IS A GOD OF DELIVERANCE

At first glance, we might think that God was out to punish Jonah for his initial disobedience. After all, being swallowed by a great fish seems like punishment if you think what it might be like living in the belly of another creature. Yet, without the great fish, Jonah would have not have survived the sea. We are told in the bottom part of 2:9, “Salvation is of the LORD,” and certainly God was all about saving Jonah not killing him. Why? God’s desire for man is always to save, that’s what His love is all about.

PUTTING IT ALL TOGETHER

We might have a hundred reasons to run away from God but none of them can stand in the face of all the second chances He gives.  No excuse can stand in the face of all His reasonable requirements and His constant desire to deliver us from our wayward directions when we cry out to Him in prayer—This was Jonah’s God…This is our God. And this is Pastor Pat FROM BEHIND THE PEN wishing you Joy in Jesus!